Now, this party took place a while ago, so the pictures aren’t the best, but I’ve been wanting to share this party theme with you all. For my oldest son’s third birthday we did an Ice Cream Party theme per his request and it was so much fun.

At the time, I did not get many pictures of the party goers or decorate much since it was a last minute party out of town, but I will throw in a couple more ideas for your party. It’ll be the coolest party on the block.

First, I want to talk about the cake. Surprisingly, we opted not to have ice cream because it was so warm we didn’t want a mess (plus, my son really only wanted the cake.)

In place of ice cream, and you can do it in addition to if you choose, we made Ice Cream Cone Cakes. These are sugar cones filled with cake mix and baked just like cupcakes. We let them cool and topped them with some frosting that we purchased from the bakery and made it looked like ice cream cones then sprinkled on banana split flavored sprinkles. You can even top with a scoop of ice cream in place of frosting!

To hold the cone cakes, I made an ice cream stand. We taped up a cardboard box and cut places to hold the cones on the top. You can make a hole, but we just made more of an asterisk because it was easier. Cover up the box with paper, decorate it, and cut open the spots where you have set to put the cones. I hoisted this unit up on plastic cups and taped on wheels I made from paper plates and electrical tape. We added some handles too (pieces of an old curtain rod that we covered in electrical tape.) If you can’t get the handles to hold up on an angle, rest them on clear plastic cups, let them hang flat, or find something lighter weight that what we found.

To go along with the sweet cake, we decided to add some kid-friendly snacks to the mix. For a cute way to serve them, we filled them into some ice cream and sherbet containers that we’d cleaned and used ice cream scoops as serving spoons.

You can see our cone hats in the picture above. The regular party hats we found looked so much like ice cream cones and just fit the theme so perfectly. You can see the tutorial for making these at the end of the post.

To decorate, I wanted to make a balloon ice cream sundae. Unfortunately, my idea tanked, but I know how to fix it for next time so I still wanted to share.

What I did was gather several bigger helium balloons and pulled them together like a scoop of ice cream. I got a red one and barely filled it (though, fill it enough that it still floats) and I added that as the cherry on top. I added a piece of paper to look like the cherry stem, but it weighed it down and wasn’t necessary, so I think next time I would leave that off. After everything, I made a cone to contain the balloons.

I meant for this whole thing to float, but that was unrealistic after the weight of the cone that I made (using a brown paper bag that I cut up.) Instead of making a floating piece, I would cut the balloons short enough that they are about the length of a cone and tie them to a weight at the bottom. Let them sit inside the paper cone floating freely, rather than taped to the cone, and make the cone so it is free-standing around them. This would make a cute centerpiece.

If you don’t want a large one, you could make smaller ones with a single balloon and tape a pompom or something on the top for the cherry.

Since this is an ice cream party, it really would be fun to have a build-your-own sundae table if you choose to have ice cream. Add some fun toppings like sprinkles, cereal, and fruits! 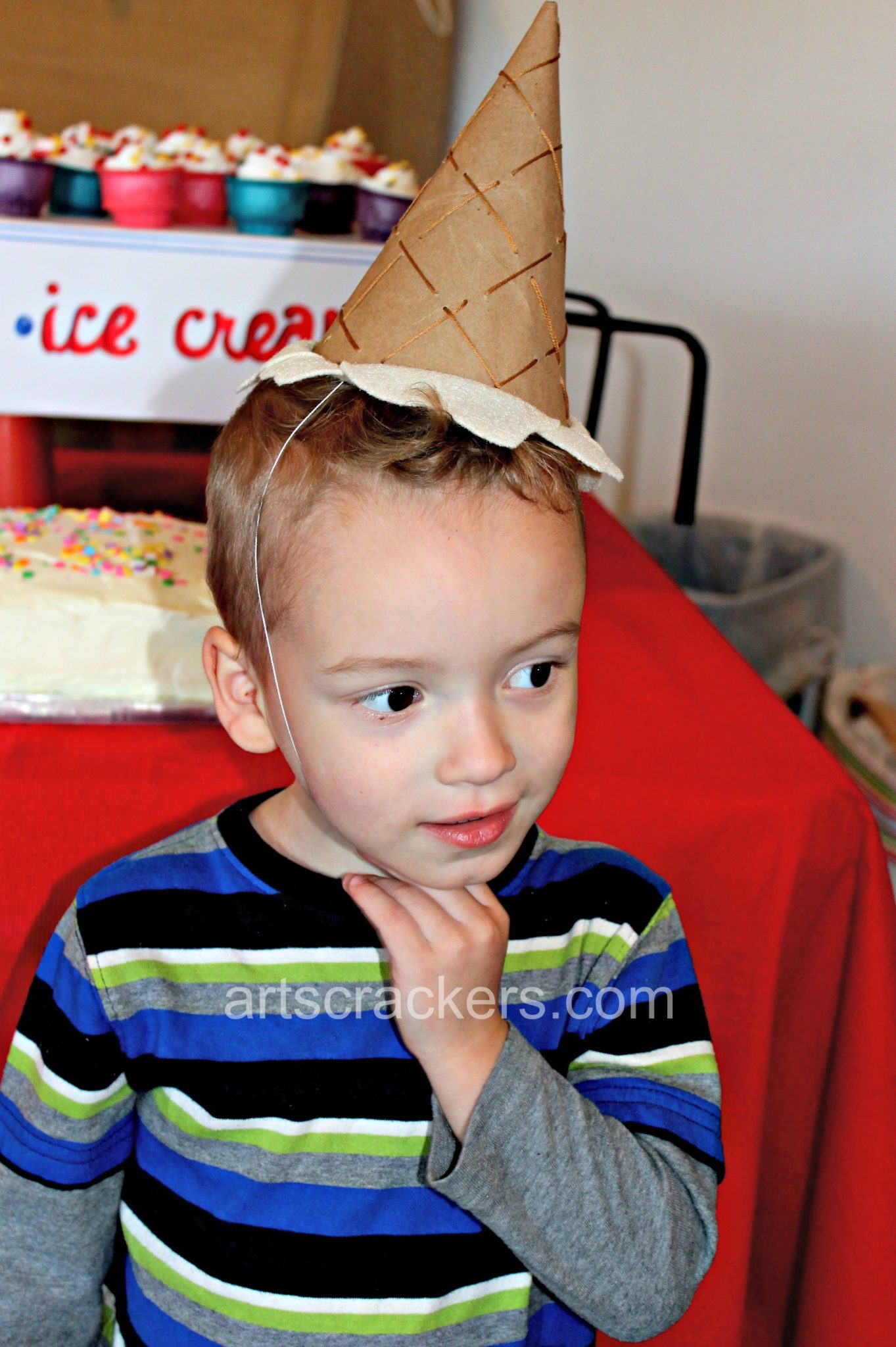 1. Figure out what size and shape you need the paper to be to cover the cone. I unfolded the cone hat and traced it onto the paper. Cut it out.

2. Thread the floss or yarn into the needle and stitch a cross hatch pattern on it to make it look like a waffle cone.

3. Glue the brown paper piece onto the cone hat (make sure it’s put back to a cone after the step where you flattened it to trace it.) I used rubber cement for the body of it, used a clothespin to hold it together until it dried, then hot glued the edges to make sure it was completely stuck together.

4. Cut out small pieces of felt and shape them to look like melted ice cream. Each hat has 5-6 pieces on it, big and small. Glue them around the base of the hat. I first clued the edge down on the inside with hot glue, let it cool, flipped the felt over to how I wanted it to sit on the head, and glued a little bit onto the outside at the base so it would stay folded out and not hang flat. Glue three larger pieces first then add small ones to fill in the gaps.

5. Let everything dry and you are all set!

Enjoy this little nugget of me wearing the hat. Hope it gives you a giggle.

-What was/will be your child’s birthday theme? Have you ever done an ice cream themed party? Will you try any of these theme ideas?