Stuffing is one of those foods that I wouldn’t want to miss in a Thanksgiving dinner spread. Since I’m on a gluten-free diet now, it’s also one of those things that I can’t eat…until now. This Turkey Apple Gluten-Free Stuffing Recipe is the perfect addition to any Gluten Free Thanksgiving menu, and it’s so easy to make!

Be sure to check out our Gluten-Free Thanksgiving post for over 200 delicious GLUTEN FREE Thanksgiving recipes, all organized by category!

A few years ago, I created a Vegan Chicken Nugget and Apple Stuffing (or Thanksgiving dressing recipe…whatever you call it where you are). Well, this is similar, but a great alternative for those on a gluten-free diet, rather than a vegan diet. Check out both recipes if you want to combine the two ideas!

I used shredded turkey for this recipes—not only does it add protein so this can serve as a main dish, but it also is a great way to use up leftover turkey. If you’re like us, you usually end up going to a ton of Thanksgiving parties, making dishes at home and then having an “official” meal with family or friends. If you have any leftover turkey from previous gatherings, use it to make this stuffing for Thanksgiving Day!

Serve this up with our Gluten-Free Rosemary, Molasses and Apple Cider Turkey Roast and Gluten-Free Gravy!

Thaw your gluten-free bread, cut it into cubes, and allow it to dry out over the next day or two. Letting the bread dry out until it’s a bit crispy is important, because this will help to soak up the liquid properly to give you the best texture.

Heat oil in the frying pan, and cook the onions, garlic and celery until tender, adding salt and pepper for taste. Remember—this is the only salt and pepper added to the recipe, so add enough here or add more later as needed.

Once the onion mixture is cooked and has cooled slightly, add that to the mixture, then add two cups of chicken broth gradually.

Gently fold the ingredients together until they are combined well. If you prefer your stuffing fluffier and moister, gradually add in more chicken broth until you’ve reached the desired consistency. I added all 3 cups to mine.

Scoop the stuffing mixture into your baking dish. Spread the mixture to keep it level across the dish.

Cover your casserole dish with aluminum foil and bake your Turkey Apple Gluten-Free Stuffing for 45 minutes.

Uncover the stuffing, increase the oven temperature to 400°F and continue cooking another 10-15 minutes, until your Turkey Apple Stuffing is cooked to your liking.

This delicious gluten-free Turkey Apple Stuffing is flavorful and filling and has a great texture. It can be served as an alternative entree for Thanksgiving, as a side, or made with leftover turkey.

As an Amazon Associate and member of other affiliate programs, I earn from qualifying purchases. 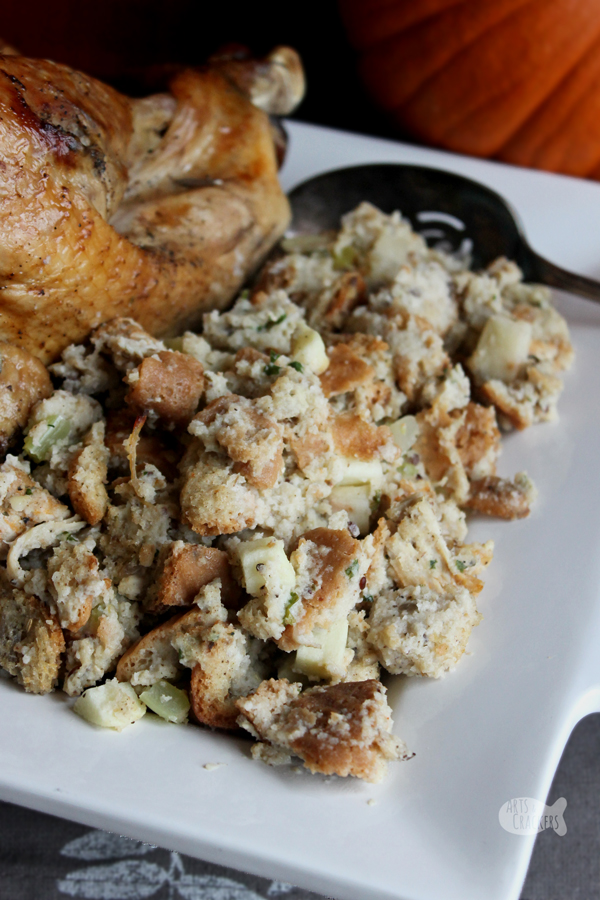 This recipe is so delicious! You can experiment making this recipe vegan, too. Substitute a flax egg for the actual egg, find a bread that is both gluten-free and vegan, use vegetable sauce (there’s a great recipe linked in the Chicken Nugget and Apple Stuffing I mentioned above) and take out the turkey!

Did you try this recipe? Come back and rate it!