Will cold cocoa make a marshmallow melt? This and many other questions were answered through this Melting Snowman Activity.

My boys are always asking for marshmallows in their cocoa. Inspired by everything snowman lately, I decided to give the marshmallows a bit of snowman charm. As we watched our marshmallow snowmen melt away, all I could see was an opportunity–an opportunity to teach science.

In our experiment, I gave my son an easy chart to choose his hypothesis (his educated guess as to what the experiment results would be) as well as chart the actual results. I had him verbally explain to me. I did not include the third question on our chart so I could better explain the question as we went, but this is something that we discussed before, during, and after.

A pop-up window will show; scroll down with the scroll bars or with the page down or down arrow buttons on your keyboard to download. The file will be instantly sent to the email provided.

This Melting Snowman Activity is very easy to set up. You only need a few supplies:

Get your marshmallow snowmen ready. Using the black and orange edible ink markers, draw snowman faces on each of the marshmallows, big and small. The kids can join in on this too. I took care of it for the sake of pictures, but we do this experiment and decorate our marshmallows all the time and the kids draw the faces on by themselves. 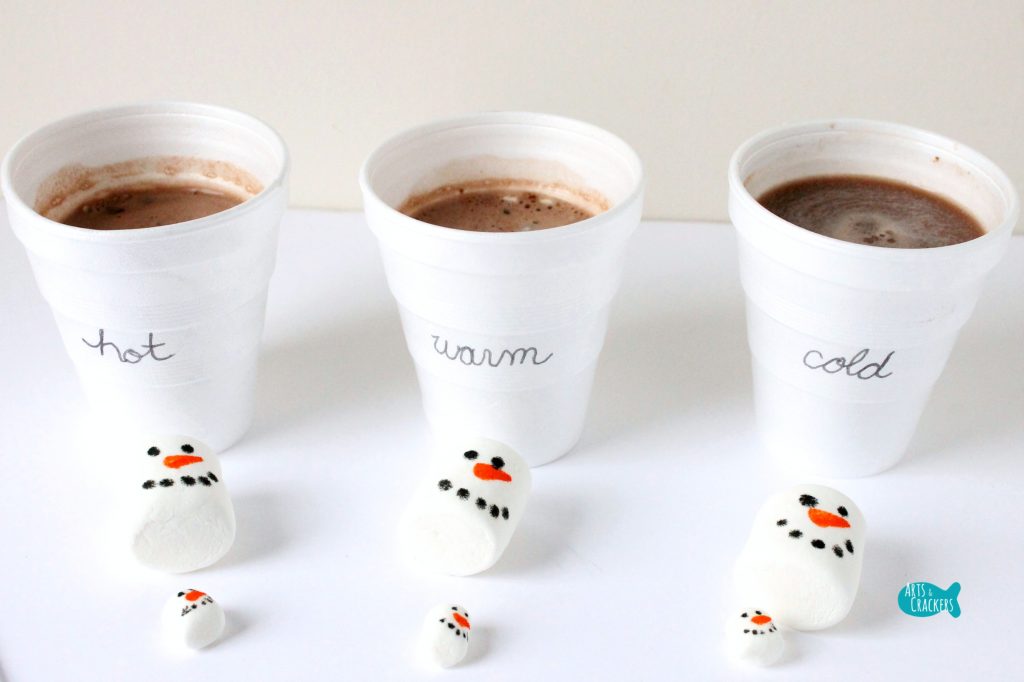 Make one cup of cocoa per package instructions. Let this cocoa sit in the refrigerator or freezer until it is room temperature or a little bit cold. I got a little impatient and added a few ice cubes to speed up the process (like my parents always used to do when I wanted hot soup or a hot beverage and just couldn’t wait), so you can do that as well, as long as it is cool.

Prepare another cup of cocoa per the package instructions, but make sure the water is warm (I heated one cup for about a minute so the mix would still dissolve, but the cocoa would not be too hot.). Let this sit out to cool to a warm temperature as you heat the next cup (but not too long).

Finally, heat one cup of water until it is quite hot. I heated up half a cup of warm water for about one minute until it was steaming hot.

Do a little research based on your hypothesis.

Put your hypothesis to the test.

On the count of three, drop the marshmallows into the cups of cocoa at the same time–one large and one small marshmallow per cup. An alternative, if this is not an option, is to observe each cup, one at a time, and time it with a stopwatch then go back and compare melting times to see which order they melted in.

We just dropped the marshmallows in and observed.

Fill in the chart as the marshmallows melt. Which melted first? Second? Third? Did any not melt? Discuss why these were the results.

To teach further concepts or look for more detailed results, try checking the temperatures with a thermometer, timing how long it takes for the marshmallows to melt, and testing three of the same size marshmallows in the same cup to see if they all melt at the same time.

Our Hot Cocoa and Marshmallow Melting Snowman Activity is an edible science experiment that teaches chemistry and math concepts such as melting, temperatures, solids and liquids, physical changes in matter, and size/surface area.

Melting is where something in solid form turns to a liquid (as the marshmallows melt and appear to become part of the hot cocoa).

One thing we were curious to find out was if the marshmallows will melt by size regardless of the temperature cocoa they were placed in (as long as the temperature was warm/hot, as the molecules in the cool/cold cocoa are not moving enough to make a difference). You may find different results, depending on how different your cocoa temperatures are (i.e. if your warm is pretty hot and your hot is closer to warm, as opposed to drastic temperature differences), but we found that even the large marshmallow melted faster in the hot cocoa than the mini marshmallow melted in the warm cocoa. Temperature matters. Share your results in the comments.

After we finished our Melting Snowman Activity winter science experiment, we of course went ahead and enjoyed the delicious treat. We did a little more learning when I explained how mixing the cold and hot cocoa together would give us the perfect warm cocoa, just the right temperature for the boys. We all enjoyed a nice cup (with some extra marshmallows) as a reward for a job well done.

If you want another fun hot cocoa science experiment, check out this Hot Chocolate Science activity from Creative Family Fun. Here’s another cute way to display your Snowmen Marshmallows, which I found from Eats Amazing when I was looking through some other hot cocoa ideas before posting!

Print this blank Science Journal from Sunny Day Family to record your research, hypothesis, and more for other experiments!

Will you try this experiment? What results do you think you will find? Share with me in the comments!