Ever since we decided to get a balance scale, my boys have been obsessed with using it…as a catapult. While I encourage their exploration and creativity, I figured it was time to teach them how to really use the balance scale along with my spiffy kitchen scale. We added this “Which Weighs More?” weights and measurements STEM activity to our homeschool lessons agenda.

The boys were able to go around the house and choose items they wanted to weigh against each other. I helped choose the items for the examples here.

We started off our weights and measurements STEM activity with two items that measured the same length, but had different weights.

You can see the worksheet I gave to E so he could record his hypothesis as well as the measurements and results of our experiment.

First he had to write down which objects we were working with (okay, so I wrote down most of it…but writing isn’t his strong suit so he dictated and I helped him out with writing.). For test one, we wrote “crayon” and “feather.”

Now he had to find some measurement for the objects. For this particular set, we went by length as measured on a ruler. Both measured at 3 inches, so we wrote that down.


On to the hypothesis. I asked him which one he thought would weigh more and why he thought that. We wrote down his answer. Sometimes the answers were very basic (i.e. “Because it weighs more”) so I tried to get him to explain a little further or would explain more after the results.

Test it out. Since the crayon and the feather were light, we used the balance scale. E had actually tried the kitchen weight scale, but the feather weight did not show up so I pointed out how it was lighter than that could measure and we moved over to the balance scale and carefully placed one item in each side.

He then had to tell me which one weighed more (and I had previously explained that the ones that weigh more will “weigh down” their side because they are heavier and the lighter object will be the one in the air.).

We wrote down the answer on the worksheet along with “more” and “less” or “heavy” and “light” or the actual weight measurements where accurate. Use different words to describe this as it really helps children understand the concept and associate each of the words evenly. You can also teach children the greater than and less than symbols and include those in the boxes when using the balance scale or between the boxes to show the association between the two object weights if you used the kitchen scale.

Discuss the results afterwards. For the crayon and the feather, we discovered that just because the two objects were relatively the same size, it does not mean they will weigh the same. The crayon is a denser, heavier material so it weighs more than the fluffy feather.

We tried with various other items too. The boys loved weighing the popcorn compared to the popcorn kernels. They discovered that bigger objects do not always weigh more than smaller objects.

By the way, don’t you just LOVE these pop quiz measuring cups?! Oh man. These are perfect for math geeks (holiday or birthday gift ideas?!).

Note: the popcorn did not show a weight on my kitchen scale until we had a pretty good amount in there, so we went with 1 cup each of the popcorn and the kernels so both could be measured accurately on the kitchen scale. An alternative would be to compare one kernel with one popped kernel on the balance scale.

S was being silly!

We also compared dollar bills to coins to demonstrate how more money does not mean more weight. You could include a Biblical application or historical application here and discuss how they used to measure money by weight but now we use paper bills.

Another group of items we compared was two sticks of butter to one stick of cream cheese. I already knew they would measure the same, as the package states the weights, but E did not. He was quite surprised to learn that two sticks of butter has the same weight as one stick of cream cheese. He had guessed two sticks would be more. This opened up an opportunity to discuss product packaging and ounces. You can also tie this into a baking lesson (there is so much science and math to be learned in the kitchen and it is a great way to get kids, boys especially, interested in cooking/baking.).

Finally we compared a couple things by size. We used a mini paper cup and compared it to a pompom. E examined the cup and noticed it was hollow on the inside while the pompom had a solid center. He guessed the pompom would weigh more. We learned that even though the cup had a hollow center, the wax-coated paper was still heavier than the furry fabric pompom. 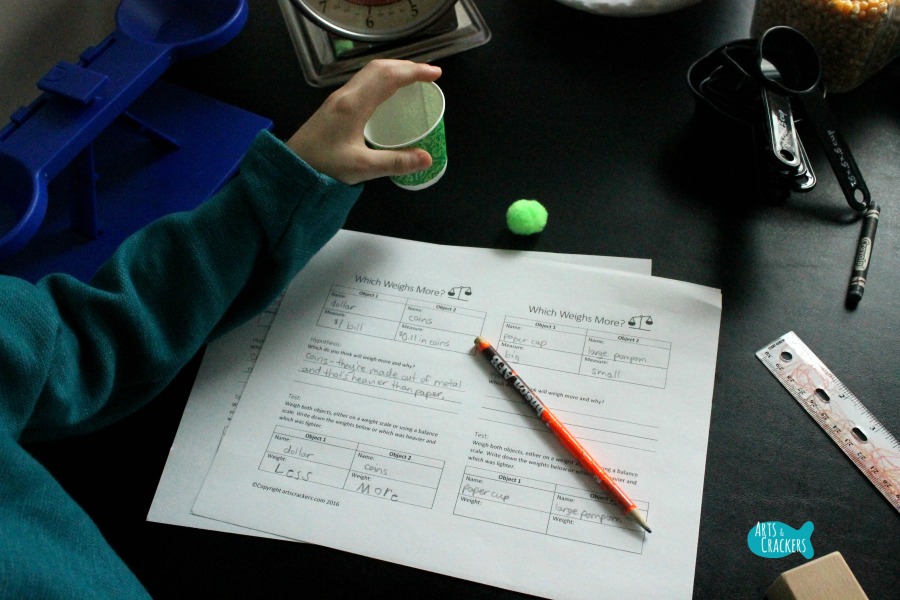 We then tried a small metal screw against the same pompom. Of course, we had guessed in favor of the metal screw, since metal is heavy, but the weights ended up being just the same. 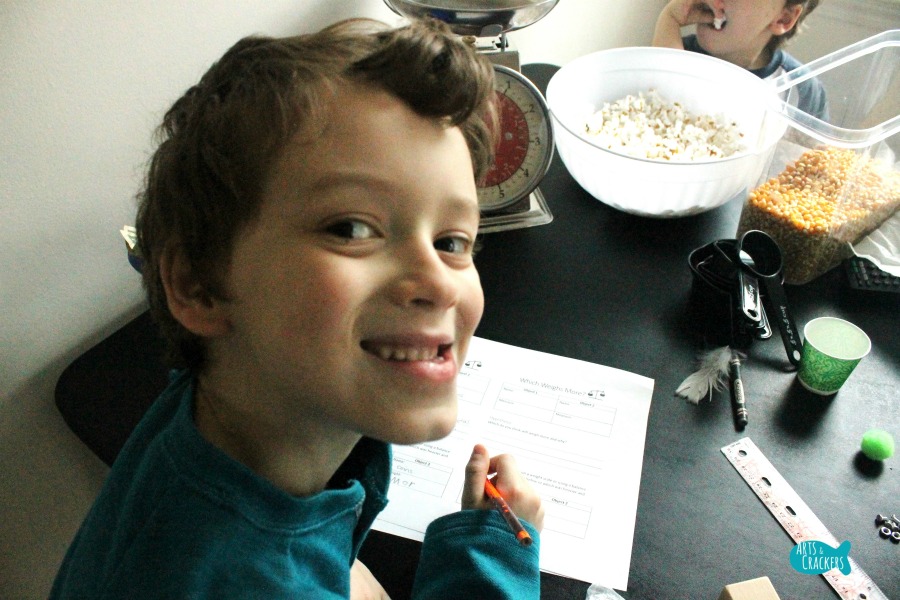 S was being sneaky.

Through these activities, you can discuss and teach:

Want the printable worksheet we used? Print it below!

A pop-up window will show; scroll down with the scroll bars or with the page down or down arrow buttons on your keyboard to download. The file will be instantly sent to the email provided.

This post is part of the A-Z Guide to Understanding STEM and STEAM! Check out the other STEM education posts on Little Bins for Little Hands.

What is your favorite STEM activity? Share with me in the comments!

Read also: Ways to Encourage STEM Education At Home and School and Our Favorite Engineering and Math Manipulatives for Kids