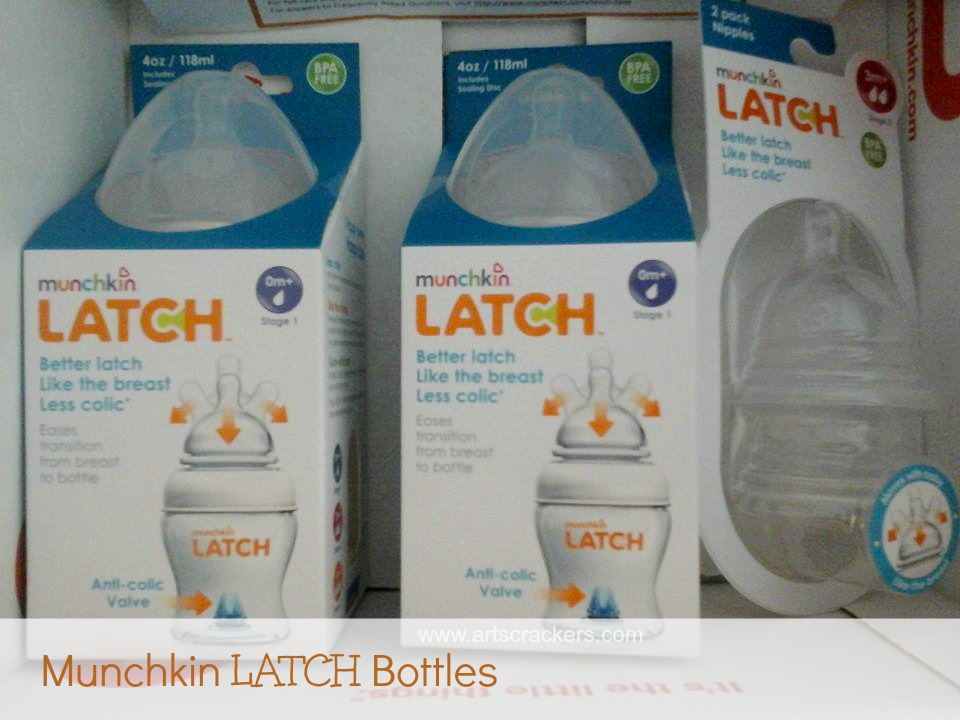 Finding the right bottle for your little one can be a chore at times. Some babies like slow flows, some fast. Some babies are combo fed and like the bottles to be closer to the real thing. The new line of Munchkin LATCH baby bottles are perfect for breastfed infants, infants with colic, and the bottle nipples can be interchanged to suit your child!

Since I breastfeed only and could not use the bottles, I passed them onto a friend that could. Her experience is shared below.

After tipping the Munchkin LATCH bottle upside down, my friend found it does not leak. A lot of bottles tend to drip out when you don’t want them to which can make a mess or cause smaller babies to choke if too much comes out at once. These baby bottles make your baby work to express the milk which I am sure helps in preventing drips. Did you know that it is actually good to have a bottle that makes your baby suck harder for the milk? It helps them to build up stronger muscles and is closer to nursing.

Photo Courtesy of my friend who helped review

This product has an accordion style nipple that tilts at different angles making bottle feeding a breeze. The nipple also stretches to reach the back of the soft palate to ensure your baby maintains a proper latch. This allows your child to keep the nipple in his mouth as he moves his head, thus working to prevent breathing in air while drinking. In fact, the nipple mimics breastfeeding by moving around freely and pumping up and down, allowing your infant to control how much milk is released. If your baby places more pressure on the base, more milk will be expressed. Besides the nifty tilting tip to prevent colic, the Munchkin LATCH also has an anti-colic valve at the bottom that prevents air bubbles from floating to the nipple and being ingested while still allowing the milk to flow freely. My baby went through colic while just breastfeeding so had I been able to use this bottle it would have been perfect.

What I’m Not Huge On

My friend did have a few issues with the bottle when she tried it for her son. The first she mentioned was that when her son would begin drinking, the nipple would suction in shortly after and have to be popped back out. Now, I know this can also happen while breastfeeding if the latch is not exactly right, so perhaps it was just acting like the real thing. She also said that the tilt, while nice, did not bend enough for her son to make a difference.

Photo Courtesy of my friend who helped review

My friend’s son had to work a little bit too hard to get the milk out. They tried the 0m+ nipple for her 9 month old and the flow was just not fast enough for him. I had her switch out the nipples with the 3m+ medium flow  which worked a little better for him, but he still did not like that and was not fond of taking the bottle. Her son uses some brands of 0m+ bottles, but he prefers heavy flow. I have tried some of the bottles for smaller babies and had issues with the holes being too large for my newborn, so I believe this would be perfect for smaller babies though not so much for your child as he gets older. I would love for her to try a heavy flow nipple to see if he likes that one better. I believe the nipple retraction issue above may have been caused by her son trying too hard to get the milk out and this would be solved by a faster-flowing nipple for an older baby.

Overall, if you plan to try the LATCH bottle from Munchkin, I would recommend you try it while your baby is a newborn or try a heavier flow. The bottles flow slowly and encourage your child to work to express the milk out so they are very close to true breastfeeding which can also be beneficial if your child is suffering from colic. My friend said that her son is not usually picky with bottles like he was with this one, but I would try it for yourself. If your child loves a heavy flow, I would use the heavy flow nipple so that he can drink more freely without the nipple sucking back in.

-Have you tried the Munchkin LATCH bottles? What do you think of them?